The Journey Of Words Launch Reviews

It's the warm summer's evening of June26th 2012 as the sun sets and an excitement is bubbling in the hearts of a few who are in possession of a ticket to enjoy a great time with an astoundingly creatively empowered poetic wordsmith. 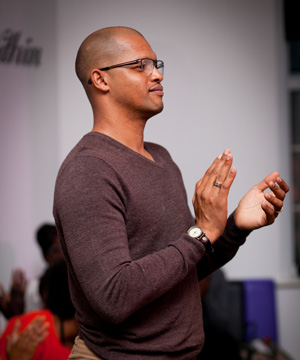 On the corner of Telham Road and Vicarage Lane in East Ham, a revamped pub sits in all its glory like a stenographer reminding the area of its bygone times. It's been remodelled within and without. The name above the door no longer bears a brewery's stamp or a publican's name but in large letters in lilac the words 'TRANSFORMATION POWERHOUSE' are emblazoned proudly.

This was the preferred venue for a reluctant but powerfully gifted poet in the person of Sharoné Maria Benjamin. She is possibly one of London's best kept poetic secrets. That line, l lifted from the blurb on the front of the programme I was handed as I stepped into the magnificently appointed venue. The evening was the showcase for 'The Journey of Words' An Evening of Spoken Word, Music and More.... and the by line was, 'Expressing Truths Creatively'.

I was awed by the ambience of the space, the decor, the astuteness of the fixtures and facilities inside Transformation Powerhouse. It's a stellar venue in that it's been designed for maximum relaxation. A multimedia system is in place as a well watered bar. Poignant parts of the white walls have scripture passages artistically rendered in black ink, whilst murals dot the place. A selection of exquisite diamanté hangings in the shape of a dove and two globes float in incandescence from high ceilings. It is such a sweet and distinguished secret to behold. Use the conveniences and l assure you of a surprising experience. A band was on hand to create the musical sweetner to help the chosen words go down. When Sharone took to the stage, a beautifully attired young woman in a white figure hugging tee shirt, an African print slanted skirt and black lycra leggings stood shyly before her audience and opened her mouth and the past poem called 'THE REAL DIVA' fell from her lips with a rapidity akin to a machine gun. She was spell binding. Clicks could be heard from the fingers of appreciative listeners. The next was 'CRABS IN A BUCKET' which was a treatise of mistrust in the black community. She laced it with rhyme and served it hot. A jazz treatment and poetic introduction of a praise song entitled, 'TOTAL FREEDOM' sizzled like bacon in a griddle and like liquid chocolate on cake. It was a jam session and we were there.

Sharone came back on stage with a present gift of 'NOW LOOK AT YOU', a poem interpreted with voice and dance. Her English tone with a hint of the mystic told a story with the gravitas of heaven's love. I clicked longer than most. 'DECEPTION' was the next poem to ring the ears in the room. Sharone delivered it with a strong sense of intentionality that drew the room to contemplate their own stance. She called upon 2012 MOBO nominated vocal group V9 Collective to collaborate on 'OUR WORLD'. Between the spoken word, vocals and the band, it was a presentation that precipitated audience participation. From her future set, Sharone came with three poems that rounded off the evening with a flourish mixed with evangelism. The first offering was entitled, 'CHECKMATE'. The storyteller in our host, painted a vivid picture with brushstrokes of colour. A chess board. The King and Queen explained and the work of redemption laced with fluid poetry. It was electrifying as the poet gave a class in the game. 'GOOD NEWS' followed. Sharone reeled off this piece in a conversational banter except this was seriously beautiful and spirit lifting. A story she told and it was well rendered. Finally, our poetic host had one more to seal the evening's stay.

She saved the best for last. 'HE IS' both enthralled and blew the mind. Sharone relayed lines of scripture wrapped in the poetic prose of her creativity. Father, Son and Holy Spirit smiled as the words found in describing them rose up to the heart of the speaker and the listeners. It was like Bible class. The voice of the poet ebbed as the last word faded.

The evening, now cooled down by a brief summer shower was rounded up by an impromptu praise song, a prayer and the benediction. In my view, Sharone Maria Benjamin has only begun. This was one event of a plethora to come. It was worth it by far. By the way, the food and dessert was a work of art.

An evening to remember.

Written and Presented by
zari alexxanderr-caine 2014

WOW – What an evening!

An evening filled with inspiration, warmth and truth, Sharone M Benjamin hosts an intimate relaunch of her ministry, sharing her gift in spoken word with other creative outlets including music and dance. 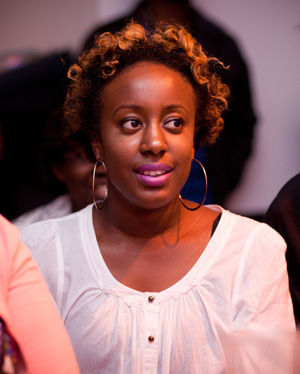 Located in the unassuming Transformation Powerhouse East London, this longue bar consciously lent itself to an uplifting and thought provoking evening. With scriptures delicately stencilled on the walls, the black and white classic décor set a traditional tone for the evening, with hints of purple adding to the character of the venue – much like the arrangement of Sharone’s evening.

Guests were ushered in and offered food and drink on arrival; chicken and rice with a fruit punch made for the perfect waiting accompaniment before the words began. The sounds of general chit chat quietened and were soon replaced with a live band, playing classics by Earth Wind and Fire and Stevie Wonder. The atmosphere continued to warm the audience whom I must say, myself included, were in great anticipation of what the evening entailed.

Sharone M Benjamin had selected a set of poems, which in revisiting her past, welcoming us into her present and proclaiming the future took on a journey of words indeed. The MC for the night Ruth Waldron (V9 Collective) opened in prayer and introduced Sharone to the stage. A personal favourite, ‘The Real Diva’ set things off; a poem that reforms what it means to be a woman, a 21st which were followed by ‘Crabs in a Bucket’ and ‘Total Freedom’. ‘Total Freedom’ concluded the past selection of poems, and was accompanied by incomparable Saxophonist Andre ‘SaxMan’ Brown. This saxophonist truly expresses complete and total freedom when he plays; his charisma and conversational style when playing make for unforgettable performances.

Now into the present, opened with ‘Now Look At You’, a poem directly taking on a conversation that God often has with us, highlighting how amazing he thinks we are. This poem was accompanied by myself and was a great opportunity to help visualise words using dance. Followed by ‘Deception’ and leading into ‘Our World’ which was accompanied by MOBO Nominated Gospel Artists V9 Collective. The perfect blend of honest lyrics, syncopated and enthusiastic musicians and tight harmonies brought attention to what’s happened to our world..

Into the future and on to some cake! Jemz Cake Box supplied a variety of cakes (including Chocolate Guinness) to sweeten the audience while we travelled into the final section of the evening. ‘Checkmate’, ‘Good News’ and ‘He Is’ primarily focus on the gospel in a unique, digestible and standing ovation worthy way. These poems emphasise who this King of Glory really is and how he deserves all the praise, honour, and glory we can give.

This event, the Journey Of Words did just that; bringing the audience not only on Sharone’s journey but inviting us to embark on our own journey to get to know The Lord better. Pastor Dave Daniel (PCF Church) closed the evening and if this evening is anything to go by, you ain’t seen nothing yet!

The night expressed truths creatively was most certainly the most diverse, innovative, inspiring and honest approach to poetry I’ve witnessed; truly, just a taste of things to come!

Purchase Words of Truth in it's various forms, visit our shop.